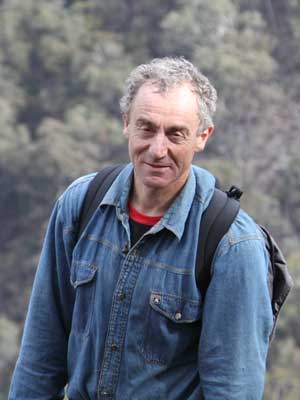 Yuri is an explorer, bushwalker and environmentalist. He is also a director of BigCi (Bilpin international ground for Creative initiatives) – an artist residency organisation, as well as of Kenyan Kinship – an organisation that provides development resources to underprivileged communities in Africa.

Yuri grew up in Uzbekistan, where he was climbing the Tian Shan mountains since the high school age. He came to Australia in 1979 and had a career in marketing, business development and design. He also retained his keen interest in the outdoors and became fascinated by the Australian bush.

In 2009, he joined the Bush Club and through that met Michael and Brian. Since that time, they have been exploring the bush together. Yuri is closely involved with the Gardens of Stone series, being the editor as well as providing business and marketing advice.

Yuri and Michael have recently started writing a new series of books, on the Wollemi National Park, that will be published in the coming years