Is the locality on the north west extremity of the Grose Valley where the Darling Causeway joins Bells Line of Road. The railway station was originally named as Mount Wilson in May 1875 as it was here that travellers got off the train to continue their journey by horse and buggy to Mount Wilson. The name was changed to Bell Railway Station on the 1st May 1889, so named after Archibald Bell. The locality also taking on this name by default.There was a surveyed but unformed street in Newnes named Bell Street as well as seven families with the surname, Bell, appearing on the electoral roll as living in Newnes between 1906 -1922. 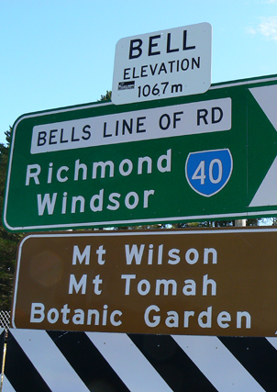